I will explain in this article how to print the numbers in  using C#, this type of question might be asked by an interviewer in a .Net position related interview.

My intent for this article is to explain how to answer a question that is often asked in an interview, which is: Write a program to print the Fibonacci series of a given number. A candidate new to the interview can become totally confused because the first problem is the candidate does not even know what a Fibonacci number is, so how will he or she know how to write the program?

So considering the above requirement I have decided to write this article with the basics and specially focusing on the beginner, student and whoever might face this type of question in an interview.

So let us start with the basics.

What are Fibonacci numbers?

The number in a series which is the sum of his previous last two numbers from the left are called Fibonacci numbers.

Now that we completely understand what Fibonacci numbers are, next I will explain how to do it step-by-step, as in the following:
And use following code in the program.cs class file:

The output of the above program will be as: 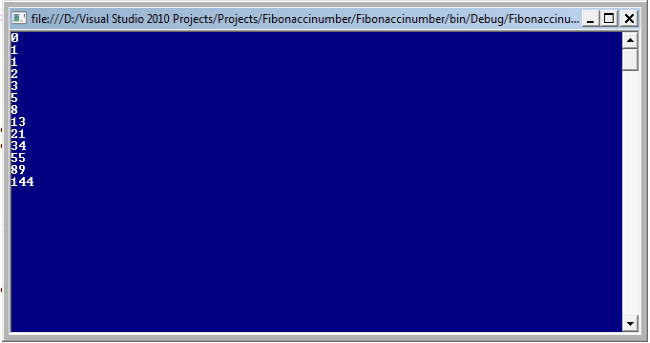 From the above output it is clear that,"the numbers in a series which is the sum of  the previous two numbers from the left are called Fibonacci numbers".
I hope it is useful for all beginners and other readers.