Readonly and constant variables in C#

Whenever an interviewer took an interview of any candidate, then they always asked one question to them which is read only and constant variable, then believe me, even four-plus experienced candidates get confused, so whatever I learned from my tech gurus about this concept, I will try to explain it in detail so that beginners and experienced candidates can understand it. So let us start with the definition.

What is Constant variable?

In the above diagram ,we can see the Constants are of two types

The compile-time constants are declared by using the const keyword, which value cannot be changed during the execution of the program.
Syntax
int const a=10;
Some key points about const variable
eg.
int const a=10;

When to use Const?

The const is used when their value is absolute constant, such PI values which cannot be changed, but according to your requirement, you can use it as a wish rather than PI values declaration.
Example of const  variable.
The output of the above program is 30. From the above example we clearly see that the const must assign the value at declaration time and in expression both the variable must be const.

When to use Readonly?

We can use Readonly when the value is not an absolute constant means which can be changed frequently, like dollar vs INR. In this requirement we can set the value through a configuration file or another variable expression, so we can avoid changing the class file frequently.
Example of Readonly variable.
Let us define the value from the config file for read-only constant variable, which will be set through the constructor.
Now, let us explain it through a sample program.
In the above program, we have assigned the value for readonly constant through a constructor which is defined in the config file because readonly constant does not have to assign the value at the time of declaration.
Now run the program, the output will be as follows 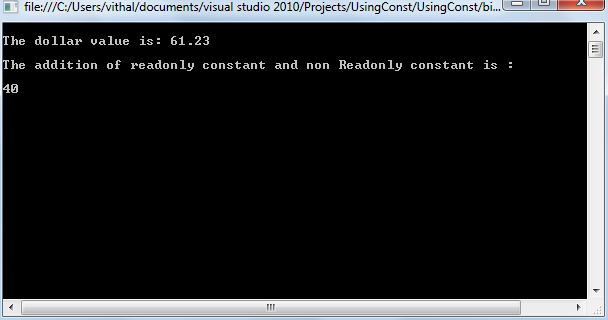 Let's outline the differences between const and Readonly variables.

I hope this article is useful for interview prospective, if you have any suggestion regarding this article, then please contact me.